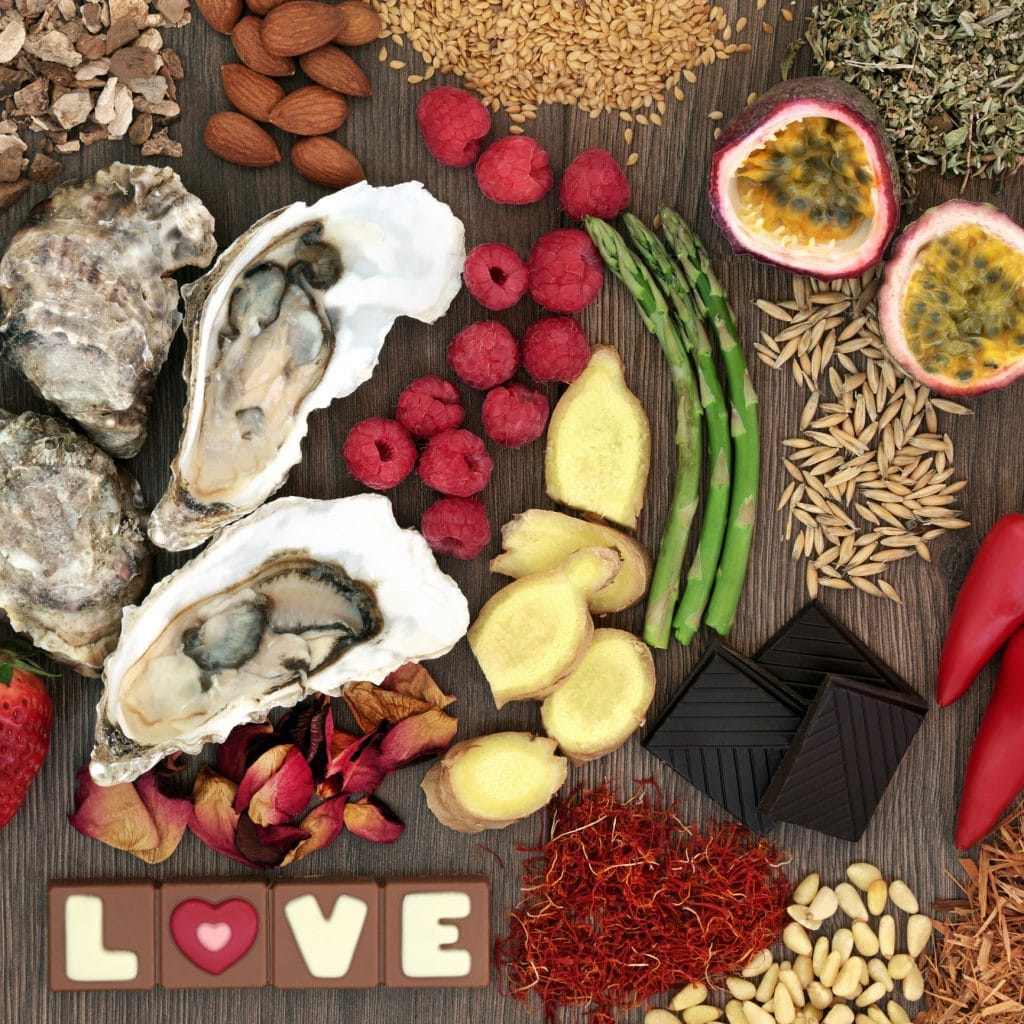 We all know Valentine’s Day is traditionally a day for all things love related, but what if you could get a dose of goodness along with the romance?

Our resident nutritionist Emily Greenwell has put together a list of her favourite aphrodisiac foods that are not only renowned for their health benefits but that will also add a little bit of spice to your day.

But what is an aphrodisiac?
According to the Oxford English Dictionary, An aphrodisiac is any “food, drink, or drug that arouses sexual desire”. Aphrodisiacs have been used for centuries. In fact one medical text from 2600BCE, lists an aphrodisiac potion that the emperor drank before he, and I quote, ‘mounted 1200 women and achieved mortality’. Stallion!

We did some digging and whilst aphrodisiac foods don’t necessarily spice up your love life, they can contain feel good compounds and improve your blood flow which may lead to an increase in sexual desire. Some of these foods also resemble more intimate body parts, such as oysters, figs and asparagus… we’ll let your imagination do the rest.

Here are a list of our top 10 foods that you should be bringing to the table on the 14th of Feb:

Chocolate
Chocolate is everywhere during the lead up to valentines and for good reason. Cocoa can increase blood flow in parts of our body. Dark Chocolate, particularly, contains mood enhancing compounds that stimulate endorphins in the body. According to research, the effects on women are much higher than men.

Oysters
Not only do Oysters look kind of sexual, they are rich in zinc, which is essential for sexual maturity and sperm development and motility. So to all you lot wanting to make a lockdown baby, oysters are your friend. One of the most famous lovers, Casanova himself reportedly ate 50 raw oysters for breakfast to maintain his strength and stamina in the bedroom, so it must be true.

Asparagus
Apart from it looking suggestive, on paper asparagus doesn’t appear to be the sexiest food, especially as it makes wee smell weird. BUT that aside, it is a great source of vitamin E which stimulates blood flow to the genitals, and it increases histamine, which in turn can result in a healthy libido. They also neutralise excess ammonia in the body which has been linked to sexual disinterest and no one wants that.

Coffee
Coffee stimulates blood flow and raises dopamine, a neurotransmitter that plays a vital role in pleasure and rewards. Drinking coffee can present as a relaxing experience, adding to its aphrodisiac qualities. It can also give you a boost of energy and stamina, if you are looking for a prolonged session in the bedroom this valentine’s day.

Figs
Figs are mainly considered an aphrodisiac due to their close sexual appearance of a lady’s secret parts. Rumour has it that they can be a successful way to treat erectile dysfunction.

Strawberries
What isn’t sexy about a chocolate covered strawberry?! Heck, they were even thought to have originated from the heart-shaped tears of Aphrodite. In addition to their sexy red hue, they also have high levels of vitamins and minerals known to support a healthy sex life. Specifically vitamin C, which is important for the production of sex hormones.

Avocado
The Aztec word for avocado literally means ‘testicle’… sexy! Avocados also contain testosterone enhancing compounds and high levels of folic acid (B9) and protein, which is great for bringing an extra energy boost to the bedroom!

Garlic
Slightly surprising this one, due to its reputation of adding a rather pungent smell to breath but they have long been known as an aphrodisiac. Garlic improves blood flow and can make you feel more alert.

So there you have it – cook up a storm and have some fun!